Find The Info You Need

You probably hear the word encryption a lot, but do you really know what it means? When you shop online, the store touts that you need not worry because it encrypts your transaction. When you message or email somebody, the app states it encrypts your messages.

What Does That Actually Mean Though?

The term encryption refers to the encoding of any Internet message in such a way that only the intended addressee can decode it. Internet message literally means any data sent via the Internet, not just a text or email.

Encryption software transforms the data sent into cipher text. If an individual did manage to steal the data sent, they could not read it unless they had the decryption key.

Symmetric encryption is when a sender and a receiver use the same private encryption key to decode and encode an encrypted message. The main drawback is that the key should be shared between the parties. Unless a secure tunnel is established, an interceptor might snatch the key and decipher the message.

Asymmetric encryption uses a two key method to for greater safety. A public key and a private key protect the message. Both sender and receiver use the shared public key, while each gets their own private key. You need both to access the message. It does leave the end-points unprotected.

Here Is an Example of How Asymmetric Encryption Works:

2) Receiver decrypts the message using his own Private Key 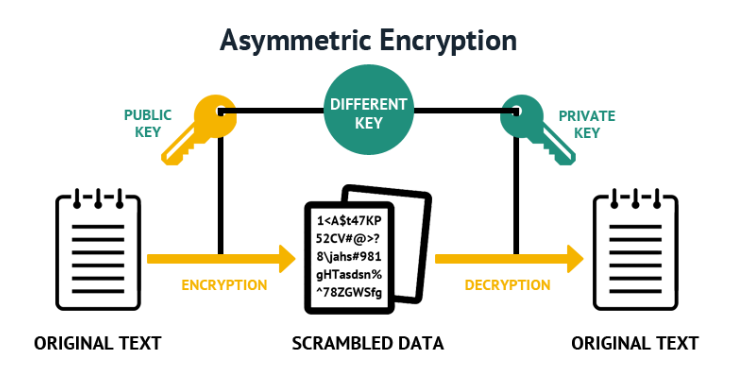 1) Sender signs his data with his own private key

2) Receiver can authenticate that the data came from Sender using his known public key.

3) No data is encrypted

End-to-end encryption (E2EE) encrypts data throughout the transportation between the two end-points, including through intermediate servers. No third party, not even your Internet Service Provider (ISP) car read it. Backup or peer-to-peer (P2P) services sometimes call E2E encryption by another name – client-side encryption. Other times, it’s referred to as zero-knowledge encryption. An example of end-to-end encryption can be found on apps such as Facebook Messenger or Telegram, however, neither messaging service activates it automatically.

Learn more about how encryption protects you and how it can help you protect the public safety with RadioIP solutions. We can help you surf the Internet more safely and help first responders conduct business more privately and safely. Radio IP: we redefine secure mobility.

Sorry, the comment form is closed at this time.